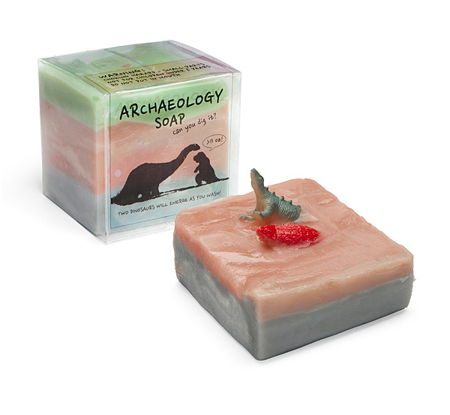 There are many different kinds of expressions in the English language that involve dirt, and one of them would be “digging up dirt” on other people, which is a strategy employed by many in the political realm in order to gain leverage on one’s opponent as the sordid details begin to surface. Well, the $16.99 Archaeology Soap might not make you feel as though you are rolling in the money like the self-explanatory Money Soap, but at least it will clean you up each time you finish embarking upon a digging quest out in your backyard.

The Archaeology Soap will be a 3″ block of soap which carries not one, but a pair of plastic dinosaurs. There is pumice in the bottom layer and bentonite clay in the second layer, and it would certainly make bath time to be a whole lot more fun and educational as well, making this one of the ways that you can entice your little ones to pick up the habit of actually bathing at least once a day to keep oneself clean – especially after sweating it out. 3″ might not sound big, but when you hold it, you’ll realize it is. This huge piece of soap is going to some time to dig down to those dinosaurs.