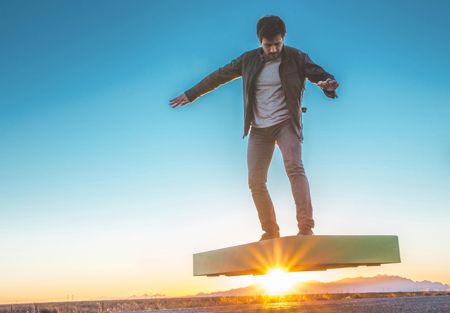 I know, I know – many of us do wonder about how many things predicted to arrive in the future earlier on through movies, books and radio spots have actually happened. While there has been unexpected positive developments in the world of computing, or even self-tightening shoelaces, we have not quite reached the age where robots can double up as domestic help in and around the home, such as the nanny in the Jetsons cartoon. Certainly popular culture items like the skateboard has been given a new twist in things – such as losing its wheels and yet having the ability to ferry you around in style (ala hoverboard). This is like a modern day magic carpet, save for the fact that you do not need to vacuum it. We are referring to the ArcaBoard.

< !—more-->The ArcaBoard is the brainchild of Arca Space Corporation, a company that is based in New Mexico. Just how does the ArcaBoard (essentially a hoverboard that has a cool name associated with it) work? It gains its ability to levitate the rider by using three dozen high-powered electric ducted fans as well as an integrated stabilization unit.

The ArcaBoard will not be as boring as the Ford Model T when that was released, since it will arrive in shades of beige, green and blue. As for the amount of time in which the ArcaBoard is able to ferry you, that is variable since it largely depends on the rider’s weight. Basically, anyone who would like to take the ArcaBoard out for a spin and weigh up to 243 pounds (using enhanced thrust) will only be able to eke out approximately three minutes’ worth of performance, and those who weigh up 176 pounds (with long endurance mode selected) can enjoy approximately double the amount of “air time”, so to speak. There is a separate charging unit that will burn a $4,500 hole in your pocket which offers a full recharge in a matter of 35 minutes.

Basically, if you are loaded and flush with cash, then the ArcaBoard is worth considering as a recreational sports item, otherwise you would do a whole lot better investing the $19,900 elsewhere.