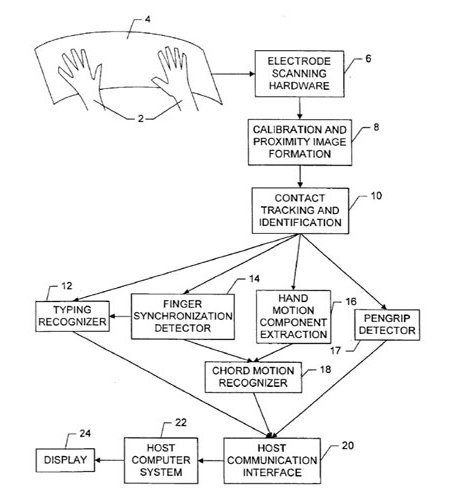 Apple has just filed a trio of patents slightly over a month after the iPhone debuted in the US, bringing the world of curved multi-touch surfaces that will be capable of recognizing more than just plain old fingertips. These new patents, when pieced together, will result in a sensor layout as well as those for mobile sensors and compliant conductors, whereby the collective technology used will bring improved touch input notes which accurate enough to create a sensor image of different parts of the hand without being bound to any particular size, shape or resolution.

I suppose should the patents go through and actually be commercialized in the near future, this would mean the multi-touch device does more than just recognize simple touch gestures, as it will be able to work out even more complex gestures including grabbing and swiping motions (with more than one finger a possibility as well). In addition, one will also selectively disable input depending on the immediate context, as typists will be able to leave their palms on a touch-sensitive device without the accidental activation of controls, whereas gaining the remaining palm rest area back for other functions where necessary. Heck, it could also be programmed in such a way where a cursor ceases moving whenever a finger comes to a complete stop.

Word also has it that a version of the technology featuring pressure sensitivity could also be used to exploit this ability, recognizing rolling, tilting or even twisting motions when it comes to manipulating content in 3D. This sounds very much closer to the screens that we see in the Matrix Trilogy as well as the Minority Report – perhaps Apple could have done some marketing in those movies by including their logo on those screens? Interestingly enough, these touch controls need not be flat, hence the combination of such could lead to particularly unique designs.