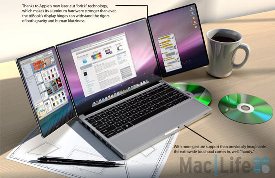 It appears that our friends from Apple have leaked some drool-worthy information on the net with their latest concept, the triBook.

Yes, I am also quite impressed at a screen that can fold out into three. These side screens are perfectly sandwiched in between the main display and the keyboard. Every time a user wants to use the triBook, he or she will unfold it like opening a cardboard box. A user also has the option of combining all three screens for a landscape display of about 21 inches.

An unfolded triBook measures at 6.75 x 10 inches, and it is about 1 inch thick. That may not be good enough to fit into a manila envelope like the MacBook Air, but I am willing to sacrifice the skinniness for that fold-out feature.

Not much is known about the triBook’s other features, other than it comes with a “kick-ass” hard drive (that is a direct quote from my source). It also has many I/O connectors, an 8x SuperDrive, plus a MacBook Pro-caliber CPU.

Right now, the triBook is just concept, but I could easily see it becoming the standard for laptops. After all, who wouldn’t want more real estate for their laptop screen? That alone is enough to convert me to a Mac user, and I’m sure a lot of people will also be Apple converts if this ever gets mass-marketed.