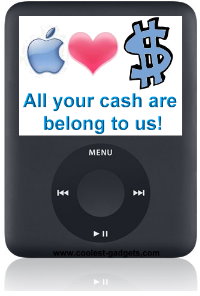 “Oh well, here’s another article from that Apple hater”, many of you will say. Well, this is not necessarily a hate article… It’s more of an eye opener if you wish.

As I was happily surfing around the ‘Net, I found the bill of materials for the new iPod nanos, and my jaw dropped a bit. I did know that prices keep on tumbling down, but I did not know that they’re almost freefalling. I also didn’t know that a ClickWheel was so cheap to make.

What struck me then is that Apple has possibly already covered the R&D costs and has started reaping some big big profits from the nanos alone. If the costs aren’t covered, then they’ll be in a matter of days.

I know you’re curious already.. read on for the run-down.

Oh, and excuse me for the geeky picture.. I just couldn’t help it 🙂

iSuppli has recently taken apart the nanos and have evaluated and compiled a bill of materials for it.

Apple has succeeded, by changing part suppliers and thanks to the continuous price drops, to make a feature-richer, redesigned iPod nano for less money than the previous generation.

So, let me just cut the gibberish short and show you the list. Enjoy..

Of course, this is only a list of material costs. The development, assembly and transport of the products aren’t stated here. Let’s consider that the end cost is $70 for the 4GB model, and $100 for the 8GB model. Still, there’s a leftover of over $100 for both models. Quite a lot, isn’t it?

There’s now a lot of money to be put in further (and hopefully better) R&D. The most part of it will probably go, as usual, to the marketing and ads section, which is the heart of Apple.

As a purely economical fact., no other company is able to buy in such volumes and get such rebates as Apple. That’s why other companies have to accept far, far lower margins, or to make some compromise, design-wise or material-wise. Of course, all of them get heavily bashed for the smallest shortcoming. Why don’t Apple get bashed for their many bloopers? And, most of all, why do the high quality, mostly better, players, get smashed with the almighty ‘It’s no iPod’ BS?

12 thoughts on “Apple iRipoff? How cheap the new iPod nano costs to build”