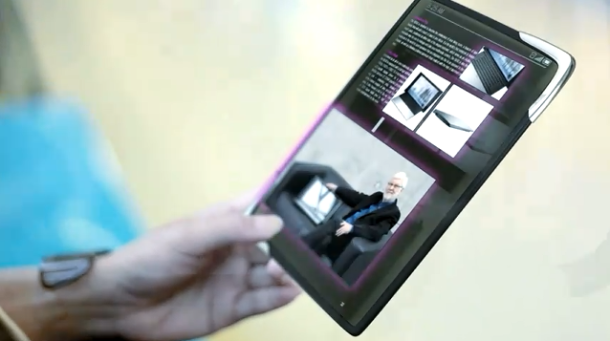 Apple figured out a long time ago that they could make a single gadget that supposedly does everything with the iPhone and the iPad. Asus takes that idea and gives it a quantum leap forward with the Isis.
The Isis depends on a lot of technology that either needs to be seriously improved or hasn’t been invented yet. Clearly, it believes that holography is just going to get better and better as this thing can project a sky on your ceiling with twittering birds to wake you up.
Of course, holographic tech will probably be like that in a few, I don’t know, decades? The tech that I found most fascinating is the Isis is able to somehow grow and shrink by simply stretching it. This technology can make the Isis become a watch, phone, e-reader, or PC screen all-in-one. Watch the video of this that was displayed by ElectricPig at CeBIT.
I don’t know if we are looking at the near or far future when we would see an Iris kit with all the accessories like the alarm clock stand and wristband. I’m sure it would cost quite a lot, at first.
Apple, are you listening? Asus is trying to do some serious moving in on your “app for everything” business model. Seriously, this could turn Steve Jobs into Steve Jobless.