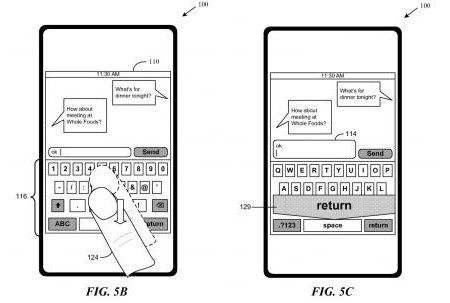 Apple is a company well known for rolling out firsts in the computing industry, and I must acknowledge that their phenomenal success with multi-touch gestures on their iPhone and iPod touch has won me over as a fan for life. Good thing this has upped the ante with Windows-based computers, as we now see some of the Windows-based notebooks coming with generous sized touchpads that feature more than just point-and-click functionality of yore, although they don’t really epitomize the ease-of-use associated with Apple’s multi-touch gestures. This time round, Apple boffins aren’t resting on their laurels as the company has had visions of improved touch screens floating around in their heads. On Christmas Day, the U.S. Patent and Trademark Office revealed an Apple patent application that consists of a swipe-gesture system to be used on touch screen keyboards. What does this all mean for the end user? Well, it basically entails the user to “perform certain functions using swipes across the key area rather than tapping particular keys.”

Just to get a better idea of things, the application explained that swiping leftward, rightward, upward and downward could be be assigned to inserting a space, backspacing, shifting, or inserting a carriage return. Makes me wonder whether this will revolutionize the way keyboards are designed, with so many of us getting used to giving a satisfying whack on the Enter key when choosing an option on the display. Does this mean we’ll benefit from smaller notebooks in the future due to a reduced size keyboard? Only time will tell, but I for one, wish the Enter key can be maintained. Apple has high hopes for swipe gestures to be implemented beyond the iPhone’s on-screen keyboard so that users will be able to gain quick access to common keys.