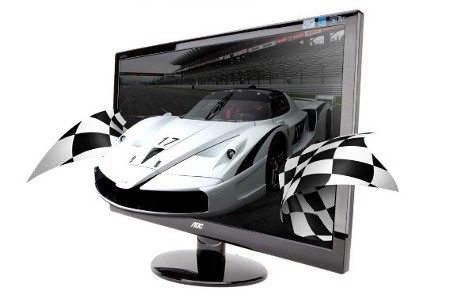 AOC has unveiled its latest 23″ flicker-free 3D monitor that will play nice with desktop computers as well as gaming consoles, it really depends on which is your “gaming poison” of choice, while sporting the latest FPR 3D technology without breaking the $300 mark. AOC’s e2352Phz comes in the form of a slim high-definition 23″ monitor, and as mentioned earlier, the FPR 3D technology utilized is able to display bright, crisp and vivid 3D images, all the while making sure that eye fatigue and dizziness are a thing of the past as this is no conventional 3D display.
The e2352Phz is a snap to set up, thanks to its plug-and-play connectivity to virtually any computer, and with a HDMI 1.4a input, it is more than ready to take on the latest consumer electronic devices such as 3D Blu-ray players and gaming consoles like the PS3 and Xbox 360 to deliver 3D video and sound without missing a beat.

Retailing for $299 a pop, the flicker-free FPR 3D technology used in the monitor means you can enjoy 3D images and video for longer periods on end without having to wipe away tears from your eyes not because of the touching scene where Jack gives up his life for the woman he loves with the sinking Titanic in the background, but due to eye fatigue. Each purchase of the AOC e2352Phz will also be accompanied by two pairs of lightweight and comfortable passive polarized glasses, and even better news is these pairs can also be used with any other FPR 3D television or display. Being crosstalk-free also translates to more crisp and clear 3D images instead of those that are blurred.
Conventional 3D systems tend to use up more hardware and burn a bigger hole in your pocket, but the AOC 3D monitor is surprisingly affordable, sporting other hardware specifications such as the capability of displaying more than 16.7 million colors, a 5ms response time and features an ultra-high dynamic contrast of 20,000,000:1, a built-in speaker, a built-in VESA stand for desktop placement or convenient wall mounting, ENERGY STAR-compliance, and discreetly concealed control buttons.
Company Page