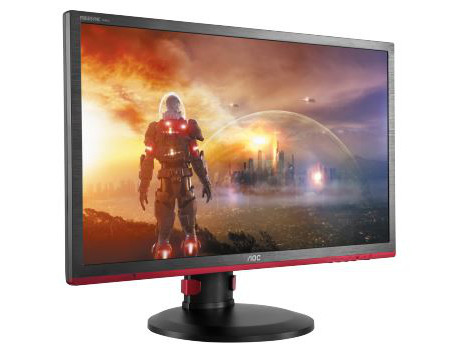 When it comes to the likes of gaming monitors, you know for sure that folks like AOC has got your back – after all, it is not as though they do not have gaming monitors that catered to your high end whims and fancies in the past, right? This time around, here we are with word that their latest range of AOC FreeSync gaming monitors are arriving in the US – which means it might just be time to upgrade – if you would want to pick it up, of course.

The two models that have been made available to the masses would be the 24” and 27” FreeSync gaming monitors (otherwise known as G2460PF and G2770PF, respectively) which will do away with tearing, stuttering and input lag. In other words, both of the monitors will be able to enable gamers to enjoy clear, detailed imagery with Full HD resolution – not to mention sharper action sequences thanks to an ultra-fast 1ms response time and impressive 144Hz refresh rate. These will work in tandem to get rid of blurring and ghosting, and in competitive games that are played at a level where the tightest of margins separate the winner and the loser, this could eventually end up being the difference between victory and defeat.

Good thing AOC has decided that both of the G2460PF and G2770PF gaming monitors will not prove to be a burden to the gaming community where its pricing is concerned – they can be picked up for $269 and $359, respectively. Serious gamers will find the displays capable of delivering an extra smooth playing experience with FreeSync that seamlessly synchronizes the monitor and GPU refresh rates. Your eyeballs will be treated to a 144Hz frame rate, which is double the frame rate of other monitors, and it shows off your enemy’s movement in ultra-smooth motion. With a pixel response time of 1 ms, it translates to speed sans the smear for an enhanced gaming experience.

Other shared hardware specifications include four-way adjustable stands (tilt, height, swivel, and orientation), VESA mounting provisions and a Kensington Security Lock, in addition to a built-in active and passive USB 2.0 hub that delivers easy-access ports for convenient connection of USB devices. It is also multimedia-ready with HDMI Input so that gamers can hook up to connect a secondary device on their monitor with up to 60 Hz.