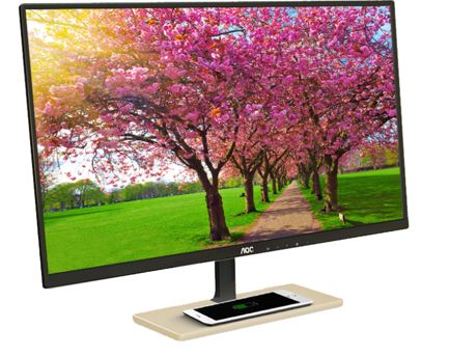 Wireless charging is the way to go, as you do not have to worry about anything such as tripping over cables and wires, or perhaps plugging your device into a port. All that you need to do is leave it on the charging plate and you’re good to do other things. The Qi wireless charging standard has been the definitive one in the industry for quite some time already, and this time around, we see a Qi wireless charging plate arrive in a totally unexpected format — being the base of the 27-inch AOC PLS monitor.

Also known by the model number P2779VC, this is the very first monitor in the market that will be able to wirelessly charge your compatible device. Using it is a snap — all that you have to do is to place your Qi compatible device right on top of the base, and then it will start to charge your device without any extra effort at all automatically. No longer do you need to bother yourself with cords and clutter, as the P2779VC allows you to be productive at the same time.

This PLS panel will also be accompanied by true 8-bit color depth, Full HD 1920 x 1080 resolution, an impressive 20,000,000:1 contrast ratio, a 5ms response time, as well as VGA and two HDMI connections that ought to make it a staple in most homes and offices.

Those who are interested in sprucing up their workspace with this bad boy can do so this December for $249.99 a pop. The monitor’s Qi Wireless Charging Base will work great with compatible devices such as the Samsung Galaxy S5 and Galaxy S6 with the Edge variants, the Google Nexus 4 all the way to the Nexus 7, the Motorola Droid Maxx, and the Nokia Lumia 920 to Lumia 1520. Of course, this is not an exhaustive list, but rather, sports the more notable mentions.