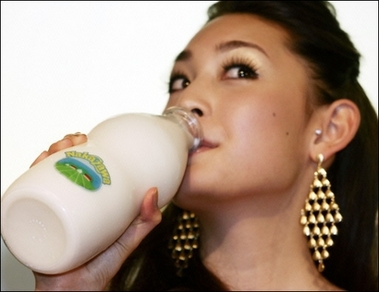 Yet another strange product from Japan. This time, it’s a natural product. Milk. However, it’s not normal milk.

It’s taken from cows only once a week, at the break of dawn. This way, the milk is about 4 times richer in natural melatonin than usual. Melatonin is considered to be a strong stress reliever.

The fact that the milk is bottled at no more than 6 hours after the milking also helps it to retain natural properties.

What’s truly stunning about this milk however is its price: $43 for a 900-milliliter bottle. Quite ‘spensive, isn’t it?

The original press release is right after the break.

TOKYO (AFP) – A Japanese dairy company on Thursday announced the launch of super-premium milk for stressed-out adults — at the price of 43 dollars for a bottle of 900 millilitres, or one quart.

Tokyo-based Nakazawa Foods will launch the “Adult Milk” line of products in October targetting “adults who live in a stressful society,” the company said in a statement.

The price of 5,000 yen a bottle is nearly 30 times as expensive as ordinary milk even in Tokyo, which is famous for its high prices.

The milk is taken from cows once a week at the break of dawn as they discharge a lot of a stress-relieving hormone called melatonin during the night, the company said.

The milk is bottled within six hours of milking at a farm north of Tokyo.

It is said to contain three to four times as much melatonin as usual milk.