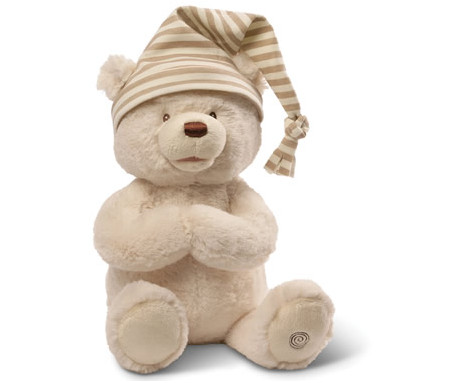 Awww, how cute! I am quite sure that many of us were taught to say our prayers before we go to bed each night, as well as prior to tucking into our meals. Since children learn by example most of the time, what better way to encourage them if their toys, too, were are prayerful as their parents? The $39.95 Animated Praying Bear will be able to bow his head as he says a series of prayers, where he even moves his mouth while reciting Now I Lay Me Down To Sleep before bedtime, which will be punctuated by a pious “Amen.”

Not only that, the ending of the prayer will also be followed by a lullaby version of Jesus Loves Me that shuts off automatically after five minutes, presumably that your little one is well on his or her way to heavenly slumber. Pressing the bear’s paw plays additional prayers in succession: The Our Father and God, Hear My Prayer. A trio of AA batteries are thrown into the mix to let you get started right out of the box, and it should be good for up to three weeks of rigorous devotionals. Best friend of the Peek-A-Boo bear, don’t you think so?