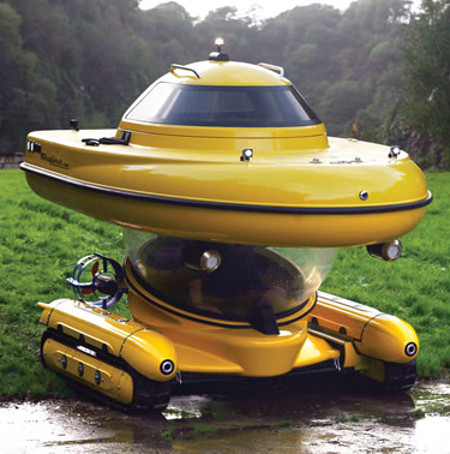 Have you ever watched a movie and saw something that you think is so cool, you wished that it were to be developed and realized in real life? Well, spy movies more often than not carry their very own slew of cool gizmos and gadgets, as James Bond can attest to, including some rather outlandish vehicles along the way. Having said that, here is a ride that dreams are made up of – although it will cause a pretty huge dent in your bank account at the end of the day, no doubt about it. I am referring to the $300,000 Amphibious Sub-Surface Watercraft.

The Amphibious Sub-Surface Watercraft happens to be a partially submersible watercraft which will be able to provide above- and underwater viewing options. It is so easy to use, so much so that you can drive right off a trailer and into the water, all without having to employ a crane, tender vessel, or dock to help you out here. It is perfect for exploring underwater environments without having to own a fully submersible craft, where this particular ride is made up of a buoyant above-water upper hull as well as a two-person cockpit that delivers 180º surface views and an inverted 1.5”-thick acrylic hemisphere below which makes enough room for two more passengers underwater views. The upper cockpit will carry the controls for a pair of horizontally oriented underwater thrusters that deliver up to 6 knots forward/4 knots backward movement as well as 360º turns. When it is on land the craft’s ground track systems will be driven by dedicated 48-volt intercooled electric motors, allowing the heavy-duty rubber tracks to negotiate up to 30º gradients for convenient ocean-, lake-, or boat ramp-based water entry and egress.