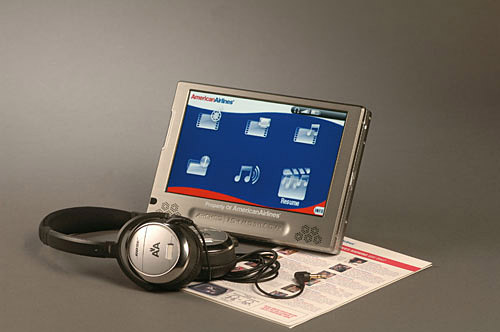 In flight entertainment has gone digital as American Airlines recently announced the availability of Archos 704 personal media players on transcontinental flights for passengers in both first class and business class. But worldwide travelers aren’t the only ones who get to play, as the Archos 605 will be made available to passengers on MD80 flights between Los Angeles and Chicago. First class passengers enjoy the experience for free while the rest get to rent the player during the flight.

Programming on both players will a choice of 12 different feature films; up to 15 hours of episodes from popular television shows, news programs, music videos, 14 American Airlines-branded audio channels. There will also be select mp3s from over 50 popular music artists.

The Archos 704 also come with Bose(R) QuietComfort(R) 3 Acoustic Noise headphones and a 7” touch style LCD screen. The 605 model, will also have choices for kids including the up to 2 hours of the Cartoon Network and will come a 4.5” screen and “high end ear buds.”

The four month test program will determine whether flight attendants can keep in flight theft down in order to roll out the program nationwide.

American Airlines is the world’s largest airline serving 250 cities in over 40 countries with more than 4,000 daily flights.