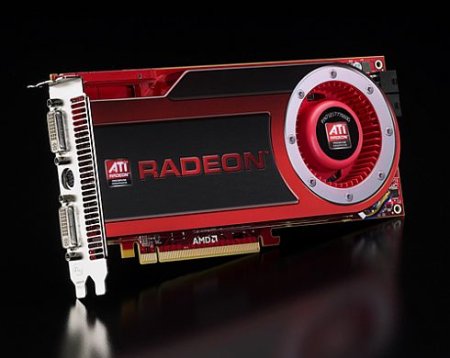 Could the tide have finally turned for beleaguered AMD who is suffering heavy casualties on both fronts in the war against Intel and Nvidia? Well, all of that might change with Advanced Micro Devices unveiling the brand new ATI Radeon HD 4870 X2. As at press time, benchmark figures have already been released, and this is now officially the fastest graphics card in the world, outperforming even the top-end GeForce GTX 280 from its bitter rival, Nvidia. This is good news for consumers, as they now have a new performance king to choose from, but it remains to be seen whether the software or game programmers will be able to match the performance and architecture of the ATI Radeon HD 4870 X2 with the relevant, optimized code.

The ATI Radeon 4870 X2 will be priced at $549, and it will also have a less powerful counterpart rolling out next month for $349 – the ATI Radeon HD 4850 X2. Both cards will feature dual graphics processors which are linked together thanks to AMD’s CrossFireX technology and a dedicated bridge chip. Of course, if your motherboard and budget allows it, you can always hook up two of these cards for quad core graphics performance to match quad core computer processors from Intel. The graphics chips in the 4870 X2 is able to run at clock speeds of a whopping 750Mhz, while the slower 4850 X2 is no slouch either at 625MHz. The former will also come with 2GB of GDDR5 memory, definitely a class above the 2GB GDDR3 RAM found in the 4850 X2.

It is highly likely that the technology currently found in the 4870 X2 will also make its way into future AMD products. Some observations lean toward using a similar graphics processor in Fusion – the upcoming family of processors that AMD plans to roll out from next year onwards. Well, it remains to be seen whether the mainstream gaming market will give more momentum to the new 4870 X2, but I have no doubt Nvidia will sleep easy as they begin their quest of regaining the performance crown and bragging rights that come along with it back from AMD. Image courtesy of Joystiq.