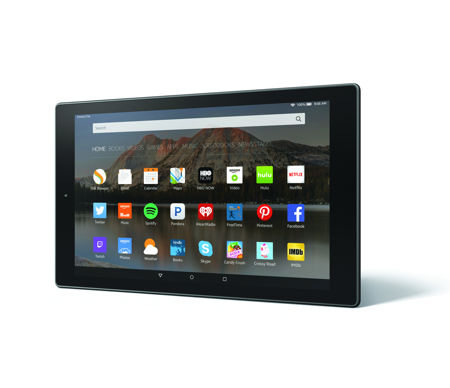 When it comes to tablets, the world is more or less divided into two different segments – one that aligns itself with iOS and Apple in the form of the iPad, while the other would be Android-powered tablets from a myriad of hardware manufacturers. Of course, certain manufacturers prefer to take the road less traveled with a variant of Android, and this time around, we have the Amazon Fire HD 10 that has just been released. This is not the first tablet that the folks over at Amazon have rolled out, and hopefully it will not be the last, too!

In terms of its features and specifications, the Amazon Fire HD 10 will come in a thin and light industrial design, measuring all of just 7.7mm which would make it one of Amazon’s thinnest tablets to date. Your eyes will be treated to a crisp and vivid 10.1” HD display with more than 1 million pixels; alongside a 16:10 widescreen aspect ratio, delivering 22% more HD video viewing area compared to similarly-sized tablets with a 4:3 aspect ratio. There will be a powerful quad-core processor running the show at up to 1.5 GHz for fast app switching and fluidity, while you can have up to 128GB of expandable storage via microSD. It will run on the latest version of Fire OS, which is Fire OS 5 “Bellini”, alongside an updated user interface that is inspired by the beautiful layouts of high-quality magazines.