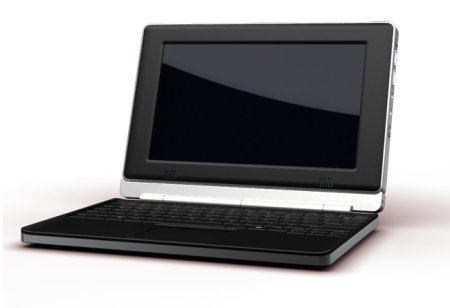 The netbook market is certainly one of the fastest growing markets in the world – just take a look at how things have changed since the Asus Eee PC 701 was released a couple of years back or so. It hasn’t even been two years that passed us by, and we have already seen the tiny netbook grow from a simple 7″ display to one that sports 10.2″ (or larger as other manufacturers try to circumvent the gentleman’s agreement with Microsoft) of viewing real estate, and the humble 4GB SSD has grown to 160GB hard drives, and one no longer needs to rely on Linux alone as there is always Microsoft Windows XP as the operating system of choice. Netbooks have even affected notebook sales to a certain extent, so it makes perfect sense for Always Innovating to come up with their extremely versatile netbook known as the Touch Book.

What sounds like an Apple product is actually a versatile netbook that not only functions as a netbook, but also doubles up as a tablet. How is this possible? No, it won’t employ the standard method of a swiveling display that covers the keyboard. Instead, the Touch Book’s keyboard itself is detachable, where you’ll then be treated to a 3D touchscreen user interface. Currently on preview at DEMO ’09, the Touch Book will not weigh more than two pounds despite carrying a battery that offers a pretty hefty battery life of 10 to 15 hours, which is pretty much three times the amount of time an average netbook is able to run before crying out for more juice.

Other features include internal USB plugs, an ARM processor from Texas Instruments, as well as the ability for you to stick it onto a fridge (it is magnetic), allowing it to function as a digital photo frame or a computer for mom to use while she searches for recipes online. You can place pre-orders for the $299 Touch Book here as Always Innovating targets a late spring release date.