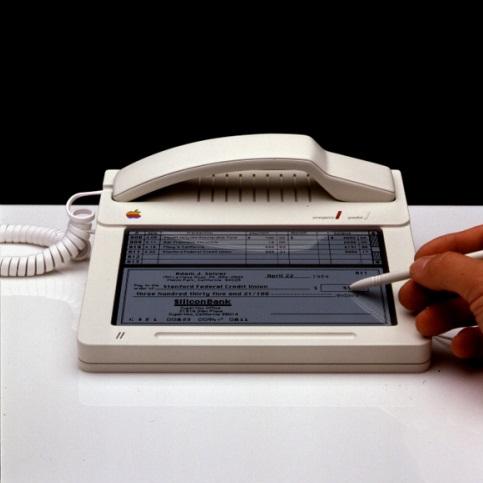 Now that we have just started the new year, people tend to get nostalgic over the last year. While I was thinking about the passing of Steve Jobs, I started thinking about what might have been.
Sure, Jobs gave us the iPhone, but this Apple prototype dates a quarter-century before its unveiling. In 1983, a designer named Hartmut Esslinger created this landline phone with a touchscreen.
Esslinger’s creation was never put into production, but he did design several other products that were a hit for Apple. After the jump, I am going to describe an alternate history where the landline iPhone became the ultimate gadget.
Yes, in this 1984, Apple went against big brother by empowering their users to write checks online, like you see in this image. As a result, the Silicon Bank founded all electronic banking, and Apple became even more rich.
In 1985, Apple creates “apps”. As a result, users have touchscreen phone access to the King’s Quest series and other popular games like The Oregon Trail. Nintendo never gets the NES off the ground as users play interactive multiplayer games on their landline iPhones.
I would imagine that texting would have become huge before 1990, and ringtones would have been on landline phones before they ever hit the mobile market. Now I wonder when the mobile phone revolution would have hit in this Fringe-like alternate universe.
Source