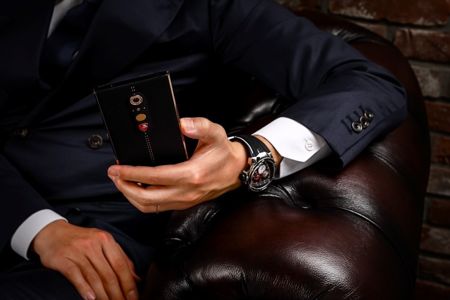 Mention the brand Lamborghini and many people would have thoughts of an exotic supercar that will set hearts aflutter, regardless of your gender. However, the Lamborghini brand has also managed to sneak its way into the world of smartphones, with the Alpha-One being the latest smartphone that has been launched in the UK exclusively with London department store Harrods. It makes plenty of sense, right? High street department store Harrods would not settle for anything less than the best, and makes a good fit with Lamborghini.

For those who happen to be living in the oil rich gulf, especially in the UAE, can pick up this Tonino Lamborghini smartphone from the Levant luxury boutique that is located right smack in the Dubai Mall, as well as the other high level hotels. Just what is the Alpha-One smartphone all about? It basically plays the role of an ambassador, representing a new species of mobile phones that will bring together technology with pure luxury. This is an idea that has been done before with the now defunct Vertu brand, so it remains to be seen whether it is going to make it big or end up with the same fate as Vertu.

Constructed using nothing else but the finest materials that are in the market, including handcrafted Italian leather and a liquid alloy that has been specially developed to resist corrosion, you can be sure that each Alpha-One is going to be worth your while. All of it will arrive in a lightweight form factor, as this specially designed smartphone merges design, fashion and functionality. Hardware features include a dual SIM slot, a speedy fingerprint sensor, a front-facing 8MP camera, a 20MP camera with optical and digital image stabilization at the back, with a Dolby dual speaker.

Any takers? It will probably cost you more than an arm and a leg, making a mockery of daylight robbery but do expect some tycoons to snap it up in double quick time, too.