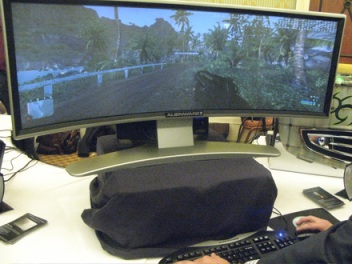 At this year’s CES, the folks over at Alienware have showcased the ultimate gaming nerd’s computer monitor.

From the Engadget report:

Don’t get all frothed up quite yet because it’s still only a prototype, but this sweet double-wide curved DLP display with OLED illumination from Alienware will reportedly be available in the second half of ’08. The curvature of the 2880 x 900 rez screen mimics peripheral vision, and in action the performance seemed pretty flawless to our Crysis-dazzled eyes (official specs report less than .02-millisecond response time). We did notice three faint vertical dividing lines that appeared to indicate four sub-panels making up this screen, but we may be willing to suspend disbelief in exchange for the potential of indulgent wrap-around immersion. There’s not even an inkling of an MSRP on this thing yet, but you know we’re gonna be keeping our eyes on this sucker for ya.

No MSRP yet, eh? If I were to venture a guess, the term “first born” or “arm and a leg” springs to mind. But, like the Optimus keyboard, there will be someone out there that will buy it just to say they have one. Also, be sure to check out the video on their site as well to see the display in action.