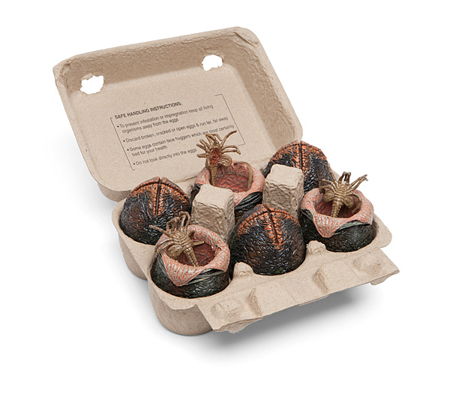 Having an origin story on the H.R. Geiger’s Alien would definitely be cool, although it does seem to have been botched up some time ago with engineers and a space traveler who can seem to only run in a single direction – that is, straight. The life cycle of the alien xenomorph is a fascinating one, where it begins life as an egg, before it starts to hatch and ends up as a facehugger – transmitting itself into the host body, and ending up as a chestburster before it slithers away to be a fully grown xenomorph in due time. Since visual teaching aids are always useful to have around, teaching the history of the xenomorph’s early life cycle to budding sci-fi fans is a snap with the $24.99 Alien – Xenomorph Egg Set.

The Alien – Xenomorph Egg Set consists of a carton of a half dozen eggs, where 3 of them have hatched the cutest tiny facehuggers. These are guaranteed to be free-range and cage-free, and is part of the officially licensed Alien merchandise. There is also no expiration date attached to this particular carton of eggs, and do be careful with the tiny parts involved as they can be a choking hazard for the little ones who do not know any better.