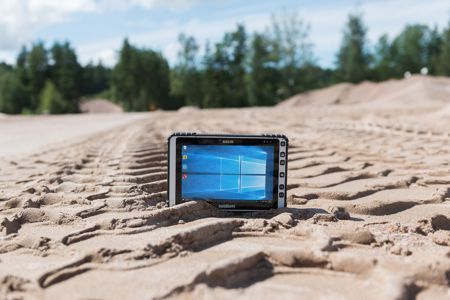 When it comes to tablets, the regular models out there in the market are not exactly the toughest puppies around. In fact, many of us would have purchased a protective case of some sort in order to make sure that there will be no unwanted scratches or even worse, cracks in the screen because of a fall. Well, this brings to mind the thought of a rugged tablet — why not get one of these and bring it with you wherever you go? The ALGIZ 8X is one such rugged tablet, being a handheld computer that has been specially built for modern field workers who need to have a powerful, portable computer while they are on the move.

For starters, the ALGIZ 8X will feature communication features such as LTE and dual-band WLAN, in addition to an 8-inch projective capacitive touchscreen which is not only very bright, but also has been built for outdoor use. You can use it even when you are wearing gloves, and it works great regardless of the weather all around. Not only that, it has a chemically strengthened glass which is a sucker for punishment, being able to survive an impact test in which a 64-gram steel ball is dropped on the screen 10 times from a height of 1.2 meters. Just in case you do not feel like using your fingers to navigate the Algiz 8X, fret not, there is an optional active capacitive stylus to help you out.

It runs on Windows 10 Enterprise LTSB and will feature WiFi as well as Bluetooth connectivity, an 8Mp shooter located at the back with LED flash, a LAN port, a COM port and barcode scanner options. Not only that, a “backpack” system enables users to add more custom features and electronics if they so desire. It is IP65-rated for dust and water ingression, while meeting stringent MIL-STD-810G military standards.