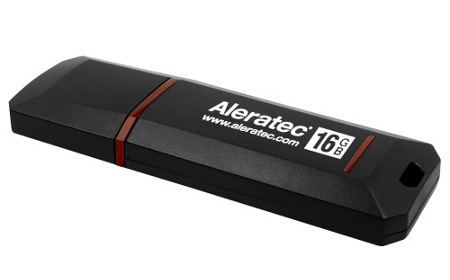 Aleratec knows that data security is of utmost importance for many people, and this is why the company decided to come up with new additions to their family of 256-bit AES encrypted USB flash drives under the PortaStor Secure guise. Osama bin Laden would have done well to store his porn collection on these, it might just slow down those investigator’s a wee bit before realizing that the man lived differently than he preached. These highly secure flash drives are touted to feature hardware encryption for fast, dependable performance and superior ease-of-use.
The USB flash drive, after all, is one of the most widely used tools that is used for transporting important data and multimedia files, courtesy of its relatively small physical size as well as near-universal compatibility. Of course, the flipside of it all would be the very same strengths end up as a weakness when exploited – they are vulnerable to loss, theft and other potential breaches in security. Aleratec intends to address this double edged sword with their PortaStor Secure.

The PortaStor Secure family of USB flash drives will come with a secure partition for confidential files, where all information that are stashed away in this secure partition will be encrypted using a time proven, always-on hardware encryption method known as 256-bit AES – which by the way, was approved by NIST (National Institute of Standards and Technology) in 2001, resulting in it being a worldwide standard.
Basically, it means all data in the secure partition will be rendered as useless to anyone without any authorized access. For an even greater security level, this secure partition will be automatically formatted after six invalid login attempts.
You will be able to choose from a quartet of capacities – too bad they aren’t large enough for our tastes – 2GB, 4GB, 8GB and 16GB. Each drive can be managed without having to install any additional software, as the management application itself is stored right on the PortaStor drive. The Aleratec PortaStor Secure 2GB, 4GB, 8GB and 16GB models will retail for $40.99, $42.99, $58.99 and $75.99, respectively.
Product Page