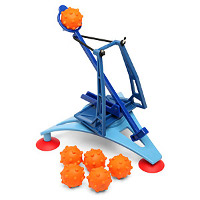 If you happen to work at an office, then surely you are familiar with this entity known as cubicles. The Air Strike Catapult from ThinkGeek, however, makes short work of such obstacles if you want to be a little bit mischievious. After all, a standard slingshot with one of those folded up “bullets” are too mainstream, which is where this $14.99 Air Strike Catapult comes in handy. This little office warfare device will feature half a dozen foam balls which make them safe enough to lob any just about anyone, and even better is the fact that these balls are not round in nature, but are a little bit spiky for an added effect upon landing on your target.
As for the kind of range the Air Strike Catapult offers, we are not talking about bringing down fortresses of old, but a 40 foot radius ought to be more than enough to handle just about any target within your vicinity. Even better is this – if you are a manager who works amongst cubicles, this is the perfect fodder to start a friendly “fight” while showing the rest of your staff that you do have a soft side to you.