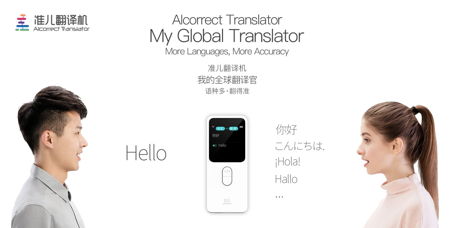 If there was one particular superpower that I would love to have, it would be the ability to be able to decipher and understand all languages. It makes communication far easier, and it will certainly be a bridge among different people groups and tribes. While the science fiction utopia of having a form of AI (Artificial Intelligence) handle all of our different languages and dialect nuances remains just that, the AIcorrect Translator might be on to something with its debut at the recently concluded CES 2018.

The AIcorrect Translator is truly special in the sense that it supports real-time mutual voice translation between Chinese/English, not to mention another 30 different languages. Chinese is notoriously difficult to master, where a single character has multiple meanings based on the intonation used, and machine translation like Google Translate have not yet achieved a kind of understandable and decent degree of translation to date.

The AIcorrect Translator will work around issues and challenges faced in cross-linguistic communication. With real-time mutual translation support in multiple situations between Chinese/English and other languages such as Japanese, Korean, Thai, French, Russian and Spanish, it claims to achieve a translation quality that is as high as 96%. The device itself comes with a touch screen, and both transcription and translation will be displayed simultaneously. When there are up to a quartet of devices hooked up, AIcorrect Translator supports conversation in up to four different languages, now how about that for amazing?

We do hope that the AIcorrect Translator will be able to have the battery life that can last for an entire working day, as we slowly but surely approach the moment when everyone is able to understand one another perfectly well without having to learn the language from scratch. Some might say it will make us lazy, but others on the opposite end of the spectrum will call it efficiency in doing things at the highest level.