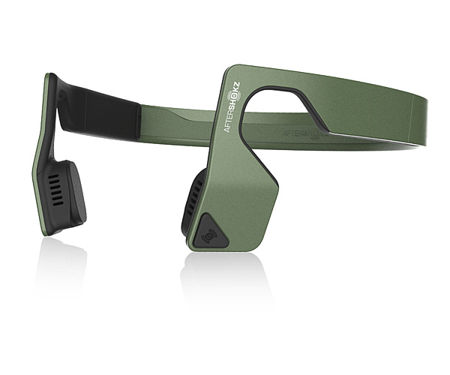 Gamers are a spoiled lot – especially those who are hardcore gamers and would like to have the very best hardware in the business in order to get an edge over the competition. Graphics in the gaming world has definitely improved over the years, and it more or less feels as though audio is the poorer orphan between the two. Thankfully, there has been advances made in this particular department as well, and here we are with the $99.99 Aftershokz Gamez – a pair of wireless bone conduction headphones that has been specially designed for gamers. There has been one for outdoor folks earlier this year with the AfterShokz: Trekz, so this one is for gamers.

Basically, the Aftershokz Gamez comes in a band that wraps behind the gamer’s head where it will rest in front of one’s ears. This would leave your ears open, while sound is sent directly to the cochlea. It will definitely play a very different role compared to those headphones which intend to block out noise from the outside world, as you can still listen to your favorite tunes or watch the latest blockbusters with sound that “happens” in your head itself, without closing yourself out from the external world. This also makes it perfect for those who love to indulge in a fair bit of jogging, as you can still hear traffic around you which might save your life from a daydreaming driver. Running on Bluetooth 3.0 connectivity with dual-suspension beryllium copper-infused transducers, a single charge lasts for 6 hours of play or 10 hours of standby, while recharging it would take a couple of hours.