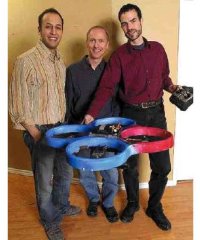 Aeryon Labs of Waterloo has released the Aeryon Scout, a brand new invention which is still in its prototype stage. Four connected foam rings, each 30cm in diameter with a rotor inside make up the Aeryon Scout. A camera is hidden in its underbelly, where a “quadrotor” is controlled by a remote control and can fly into places where it’s too difficult, dangerous or time-consuming for ordinary folk to go and snap a few shots. I suppose police and the military will find this useful, and so would the paparazzi.