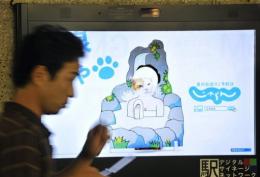 Billboard technology is just getting more and more advanced. We had that one with augmented reality in the Netherlands a while ago, and, more recently, the Forever 21 billboard at Times Square.

This one is not a billboard, per se, but a large advertising station at a Tokyo subway station. It is fitted with cameras that “read the gender and age group of people looking at them to tailor their commercial messages”.

I’m sure all of you have already drawn the comparison to these Tokyo advertising stations and the ones seen in a subway in the film Minority Report. It is astonishing how many times I reference this movie in my writing, and the scene I am referring to is one where an electronic billboard actually calls Tom Cruise’s character by name. It did so by eye-scanning, and I can see this type of technology easily becoming a reality.

After all, the sidebar ads seem to be asking me if I am looking for Singles in my area, and they guess what area I’m living in quite accurately. Yes, that is a little scary, and so is this billboard technology.