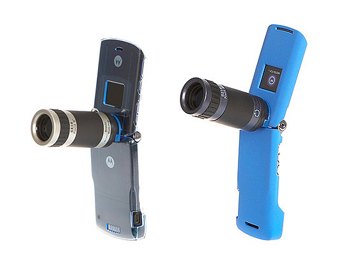 How many times have you wanted to take a picture with your camera phone, but found that you were too far away to get a decent shot? Honestly, I can’t say that I’ve ever ran into that issue myself. However, if you’re one that loves to take pictures, but doesn’t actually carry a real digital camera then you’ll be pleased to see these telescopic lenses for your phone.

As you could well guess, it’s next to impossible to make a lens that would work with all different phones. That’s why these will only work with a Motorola RAZR V3 or KRZR K1. If you don’t mind carrying this around in your pocket all the time, then it will only set you back $19. Personally, I’d rather just carry a small camera around with me.