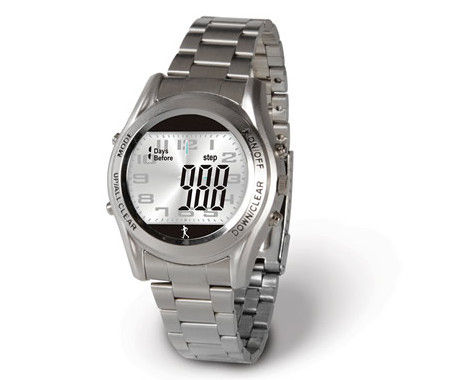 Most of the time, we would see watches as devices that have only one function – to tell the time. Sure, some of them do come with built-in alarm and all that, but it is still primed to let you know what time of the day it is. While some other watches have started to offer more than just that, those of you who would like to keep track of how much movement you make each day without having to wear a fitness band of sorts, can rely on the $99.95 Activity Tracking Dress Watch.

This will be different from majority of the pedometer watches out there which do not betray their added functionality, that is, they resemble sports watches. This Activity Tracking Dress Watch will be different – it is meant to be worn with business attire, while it goes about its task in a discreet manner, jotting down information such as the number of steps taken, distance, time spent walking, and calories burned. All of those will remain hidden – at least until you press a button, and it will make an appearance digitally, in order to preserve the watch’s formal appearance. Capable of recording up to a week’s worth of activity, the advanced accelerometer can tell the difference between actual steps taken and movements such as waving your hand or standing up, resulting in accurate step counts.