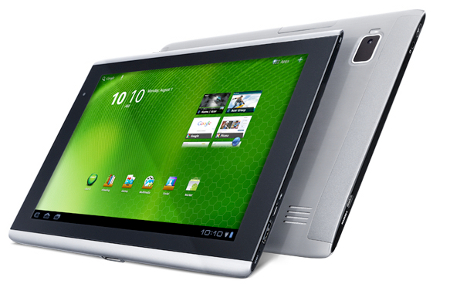 Google has certainly made a whole lot of people hungry with their creative naming convention to depict the different operating system upgrades that they have rolled out so far. In order not to bore you with a long story, Android 2.1 was known as Eclair, while Android 2.2 Froyo proved to be rather delicious. Android 3.0 Honeycomb was a special tablet-only operating system update, while Android 4.0 Ice Cream Sandwich intends to cut down on the fragmentation that has long plagued Android users, which means Android 3.0 and Android 2.2 users can now make the jump to Ice Cream Sandwich.
However, not all hardware manufacturers have prepared their device(s) to support Android 4.0, and good thing Acer is not one of those companies. In fact, Acer intends for owners of their popular Iconia Tab line to make the jump to Android 4.0 Ice Cream Sandwich. In fact, an Over The Air (OTA) update for the Acer Iconia Tab A200 has already been pushed for some time now, and the entire exercise will be complete over the course of the following week.

Apart from that, those who own the 7″ Acer Iconia Tab A100 and the 10″ Acer Iconia Tab A500 will soon be receiving Ice Cream Sandwich on their respective tablets when April rolls around in slightly more than a month’s time. Just what kind of changes can you expect with Android 4.0 on board your Acer Iconia Tab? Well, we are looking at new features that enables users to enjoy a greater degree of usability and customizations, while other cosmetic improvements include a faster browser, enhanced app and folder management options, a more intuitive navigation, and a completely reimagined design.
There is also tighter integration with Gmail’s email as well as calendar functions, not to mention an improved multitasking and switching between tasks experience. According to Paul Tayar, Director of Product Marketing, Acer America, “The many enhancements in Android 4.0 OS complement the sleek, powerful and well-designed Acer Iconia Tab tablets to give customers an all-around first-rate experience. Customers will experience greater entertainment and productivity with the new capabilities and features on their tablets.”