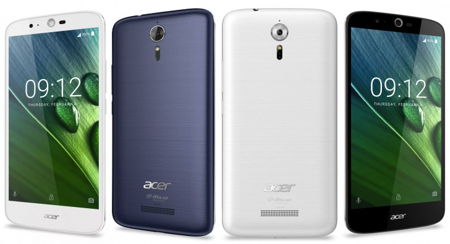 I am quite sure by now that we all know how not all smartphones are created equal, and having said that, there are different kinds of models for you to pick and choose from that should be able to suit all budgets. While the more popular names such as the iPhone from Apple, or perhaps the Samsung Galaxy S series from the South Korean conglomerate might appeal to the broad majority, how about turning your face to Taiwan-based Acer? Acer has just introduced its LTE-enabled Liquid Zest Plus smartphone that has been specially designed for avid explorers who are on the lookout to obtain the most out of their daily adventures.

The Acer Liquid Zest Plus happens to be a 5.5” smartphone that will run on Android 6.0 Marshmallow right out of the box, which is a good thing since this means you do not have to worry too much about waiting for a software update the moment you unbox it. Not only that, you can be sure that the Liquid Zest Plus will not run on empty right smack in the middle of your workday, thanks to the included high-capacity 5,000 mAh battery. At that capacity, we are looking at perhaps up to 3 days’ usage according to Acer.

If you need to make use of the Liquid Zest Plus when it is running low on juice, then fret not – it has the ability to quick-charges to 50% capacity in under an hour for over a day’s worth of power; while USB OTG (On-The-Go) technology is thrown into the mix so that you can share your Liquid Zest Plus’s power with a friend so they can charge their phone when they’re running low.

At the back of the Liquid Zest Plus lies a 13-megapixel camera with an ultra-fast hybrid tri-focusing system that enables it to capture beautiful moments precisely as they happen. The camera will intelligently focus on different scenes: phase detection auto-focusing (PDAF) for bright daylight scenes, laser focusing for dark scenes at short distances (such as restaurants), and contrast detection auto-focusing (CDAF) to capture subjects in low light. As for its front-facing 5-megapixel camera, it sports an 85-degree wide angle lens that will be able to make sure that selfies are not lonely affairs.

Expect the Acer Liquid Zest Plus to arrive in Moroccan Blue and Andes White colors in North America this July starting for $199 a pop.