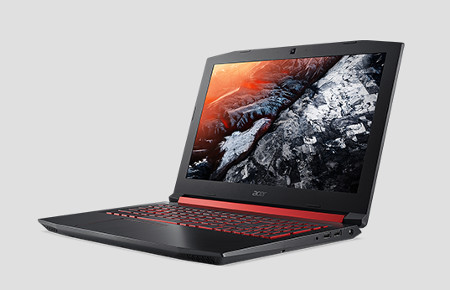 Acer has certainly come a long way from being a second tier PC company, and the kind of hardware that they push out these days are impressive to say the least. The gaming laptop is a fiercely competitive market segment, and there is quite a number of players out there in the market who makes it extremely interesting for hardcore gamers to pick a model of their choice to get their gaming kicks in while they are on the move. Acer’s Nitro 5 gaming series has recently been augmented with the inclusion of the latest 8th Generation Intel Core i7 and Intel Core i7+ processors, where it will deliver both improved speed and threading efficiency so that gamers will have less performance-related issues to worry about in the long run.

The Acer Nitro 5 with these new 8th Generation Intel Core i7 and Intel Core i7+ processors will bring with them an improved six-core design, placing an emphasis on premium performance so that dropped frames are a thing of the past. Intel Optane memory further increases responsiveness and load times, while the NVIDIA GeForce GTX 1050 Ti graphics that is located underneath the hood will deliver a truly immersive graphic experience with faster rendering, finer textures, and dynamic lighting than ever before. In terms of storage capacity, it comes with up to 512GB of NVMe PCIe solid-state storage, which should be plenty of space for those who have tons of apps to work with, not to mention games and ultra-fast boot up times.

In addition, Acer’s Nitro 5 will also come with up to 32GB of DDR4 memory, and this memory draws 20% less power compared to DDR3 memory in order to deliver a more efficient gaming session. When you are gaming, Acer’s NitroSense utility will keep track of the status of the CPU/GPU, as CoolBoost technology goes to work while adjusting the fans for optimal performance. There is a futuristic looking backlit keyboard to keep the 15.6-inch Full HD IPS display company, while a front-facing HD web camera and Dolby Audio Premium speakers add to its aesthetic value. Connectivity options include USB Type-C, HDMI 2.0, and Gigabit Ethernet, with prices starting from $749 this May onwards.