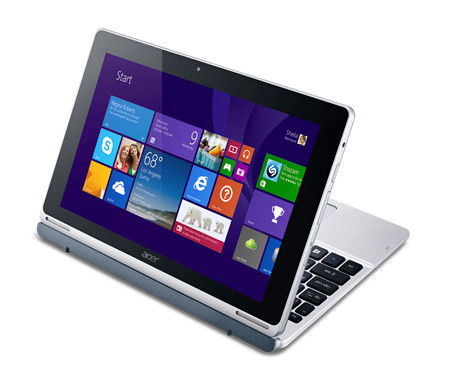 Hybrid notebooks – the ones that can function as a tablet as well as a notebook, depending on the time in which you would like to use it as such, has not really caught on. In fact, I work on a hybrid Lenovo notebook, but seriously, have not used the tablet function at all in any formal capacity, other than to just give it a go once in a while for fun. Acer is back with a refreshed 10 series 2-in-1 notebook range by introducing not one, but two new 10.1” models that feature the Intel Atom quad core processor, sporting a fashionable and flexible design that targets basically anyone who wants a lightweight device for essential computing on the go.

Apart from that, Acer has also announced that they will refresh their Switch 11 series with a new 11.6” model which will leverage on a new hinge design, improved ergonomics and more processing power. Both the Switch 10 and Switch 11 notebooks will be supported by Acer for the free upgrade to Windows 10. Thin and lightweight in nature, the new, durable Aspire Switch 10 E (SW3-013) and Switch 10 (SW5-015) have been specially designed to travel with you regardless of where you go. They will run as a full Microsoft Windows 8.1-based notebook and tablet, all in a single flexible device that features a magnetic detachable design for latch-free docking and smooth transition between four modes.

You can use the notebook for content creation and other productivity apps; while the pad is used for browsing the Internet, viewing movies, playing tablet games and taking notes; with the display showcasing presentations in small meetings, as well as for sharing with friends and communicating via videoconference; and tent mode lets you watch movies and maximize space in confined spaces, such as while traveling by plane or train.

The second generation Acer Snap Hinge 2 that sees action here offers exceptionally smooth switching between modes, and you can elevate the keyboard dock up to 5 degrees, so that you can enjoy an easier and more comfortable typing experience. The 30Wh battery delivers up to 12 hours of battery life on a single charge, which is enough for working on a transcontinental flight, or even spend an entire day at class.

Expect the Acer Aspire Switch 10 (SW5-015) to retail from US$399 onward as it arrives next month, while details and pricing on the new Switch 11 will be available later this quarter.