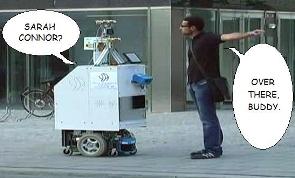 Since I am male, I have this thing about not wanting to ask for directions. It would appear that a German research group known as the Institute of Automatic Control Engineering has created a robot that asks directions for them.

In fact, the Autonomous City Explorer, or ACE, is completely dependent on directions to get to where it needed to go. This robot was recently let loose off campus from a University in Munich, and it was programmed to get to a landmark 1.5 kilometers away. Check out the video after this jump.

ACE used no remote control or GPS navigation, but literally followed people’s pointing gestures. The robot would approach a pedestrian, and then display a touchscreen asking if he or she was willing to help. If the pedestrian agreed, then he or she could point, and even select a path for ACE from a list of options.

It took 5 hours and 38 interactions with people before ACE finally arrived at its destination. Granted, that time wouldn’t win The Amazing Race, but this direction-taking robot, slow as it may be, is one small step that could help robots “interact with humans more naturally”.

Well, as you can see by the balloons that I put on the source photo, you know where I think this is going. Let’s just hope no one gives Ah-nold or the T-1000 directions when they show up and start asking about Sara or John.