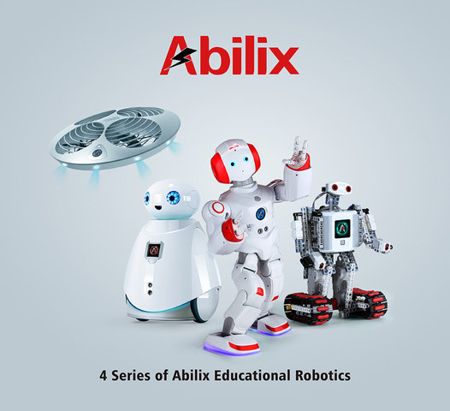 Many people might think that programmable robots are meant for adults, as the younger ones do not have the kind of knowledge or basics required in order to get the job done. Abilix thinks otherwise, and would like to use robots to help children get into the programming groove from a very young age itself. In fact, Abilix decided that one is not enough — and hence, they have rolled out four of these educational robots.

The Brick series Krypton will come with a unique six-face attachable system. This would provide plenty of leeway for mechanical creation, allowing the child’s imagination to run free as they come up with any kind of models that they desire. Krypton will also be equipped with a powerful controller and voice recognition and face recognition capabilities as added value.

As for the mobile series Oculus, it looks really fancy on the outside with rich sensors and actuators to boot. Not only that, it has the smarts within to match its looks, sporting powerful programming apps alongside a cyclone dust-collecting system. This places the Oculus as the leading mobile series educational robot in the market, and is the only automatic vacuum cleaner to date that is able to sweep in a random manner.

For the flying series Iris, it is the first flying series educational robot in the world that has been specially designed for preteens and teens. Arriving with many original core technologies, it works great in terms of safety, drop resistance and collision avoidance. There is a fully-enclosed protective technology as well as 360° obstacle avoidance technology, making sure that the children will remain safe and sound during its operation. The damage-free after dropping technology does its bit to ensure the robot does not end up being too frail should it fall from somewhere high.

Last but not least, the 2-DOF hip joint motor found in the Humanoid series Everest enables it to walk around like a human being, as well as make turns on the double unlike other robots that are in the market.

All of these will work with Abilix’ revolutionary programming systems which have been specially designed for children across varying age levels. 3 to 5 year old children are already able to control their robots with the Project Programming App, and this bodes well for a future generation that is science literate.