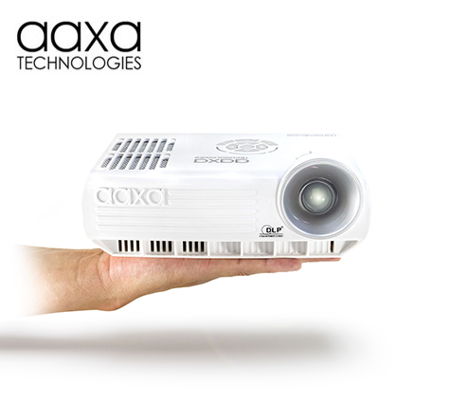 When it comes to the world of pico and portable projectors, it seems as though there is no other name apart from that of AAXA Technologies that does it better. This time around, the folks over at AAXA lay claim to the M4, touting it to be the brightest battery powered projector in the world that will incorporate a lithium ion battery. Just how bright is it? For starters, it is said to feature a powerful 800 lumen LED optical engine, now how about that?

This would make it to be a first in the world of mobile projection, as the AAXA M4 portable projector makes full use of a relatively powerful 28 watt lithium ion battery which will be able to deliver the “anytime anywhere” kind of projection, making it handy if you are a road warrior who is constantly on the move. Sporting an onboard battery which is capable of supporting up to 90 minutes of operation time when it runs in eco brightness mode, this enables it to produce more than 3 times the level brightness of other battery powered projectors in its class.

AAXA Technologies has ensured that they employ the third generation optical system so that it can deliver a brilliant 800 Lumens of brightness, while it remains powered by 20,000 hour vibrant color LEDs, Texas Instruments DLP, is accompanied by a native HD resolution of 1280 x 800 (WXGA) pixels resolution This particular optical power house would mean one is able to enjoy screen sizes of up to 150” in dark areas, and it works great in brightly lit areas as well, now how about that for versatility?

Just to make sure that it can handle projection in the long run, you can always plug it into a nearby power outlet using the included high efficiency AC power adapter. Other features include a built-in DTV tuner that lets you enjoy broadcast TV no matter where you are, so that you do not miss out on a favorite game or news announcement, while connectivity options include HDMI, VGA, and Composite Video input. There will also be a microSD memory card slot for direct playback of media from there, and interested parties will have to shell out $599 for the AAXA M4.