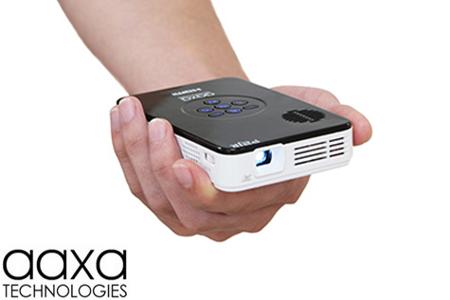 The name AAXA Technologies would certainly be a familiar one to those who happen to have some knowledge about the world of pico projectors. Ah yes, pico projectors, the tiny devices that was once thought to be able to take the world by storm, but one way or another, pico projectors never really managed to take off in a big way. Well, suffice to say, the pico projector market has plodded along rather all right on its own, being more of a niche market that warrants a new iteration from time to time, and AAXA Technologies has stepped into its role this time around with the release of the P2 Jr pico projector.

What makes the P2 Jr a next generation pico projector would be the fact that it is based on AAXA’s amazingly small 4024 optical engine. This super diminutive 4024 light engine is roughly the size of three stacked half-dollars, where it is capable of producing a giant 55 lumens of brightness, which is a whole lot more than many flashlight combined together. Right at the heart of this pico projector engine would be Texas Instruments Digital Light Processing (DLP) technology that has been mated to 15,000 hour LEDs and advanced micro-optics.

The result of all this amalgamation and technology coming together? You end up with a pico projector that is capable of producing an extremely vivid 55 lumen picture, in addition to having 1000:1 contrast ratio and images that are splashed in vibrant colors. To ensure that it remains up to date and relevant in today’s market, the P2 Jr will also accept a High Definition digital video input of up to 1080P (1920×1080), courtesy of its mini-HDMI port. Video sources will be able to include cell phones, tablets, Blu-ray players, and video game consoles. There is also an additional video input in the guise of the VGA harness cable thrown into the mix for added versatility.

So far, the P2 Jr’s built-in rechargeable lithium ion battery has been rated to run for 120 minutes on a full charge, and can be powered by battery and DC power mode, where everything is going for $199 a pop for a limited time.