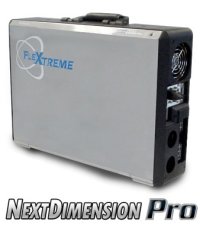 NextComputing have the honor of creating the first flextop computer in the world which is based on Intel’s Xeon 5300 processor. Known as the NextDimension Pro and Evo machines, both computers have shown their prowess by taking advantage of the power requirements of two quad-core processors that stand at 100W instead of the 160W found in desktops. This briefcase-sized computer carry a jaw dropping 8 cores, providing higher performance per watt and better energy efficiency in such a small package.

Not only do they pack in more than enough processing muscle to power the most demanding office applications, the NextDimension computers also come with a quartet of PCI slots (PCI-E for the Evo model), boast Firewire and Gigabit Ethernet (2 ports) connectivity, audio line in/out, and has enough room for you to expand the RAM up to a whopping 24GB via four DMA channels on both models. You can also cram in up to a dozen 160GB 2.5″ hard drives running at 7200RPM.

If you’re interested in either machine, make your way down to Interop Las Vegas later this month, although chances are you won’t be able to lug one home from there as there is currently no word on pricing or availability. It definitely won’t be cheap when launched, and I wouldn’t advise you on using this as a laptop as men will probably end up frying their next generation unintentionally. Any idea what would be the most practical use for both NextDimension flextops?