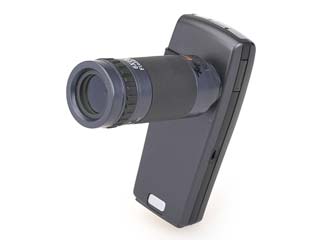 I don’t know why no one’s thought of this before. It’s a mobile phone case mod, which replaces the standard camera lens with a 6x zoom lens. To install the zoom lens, simply remove the standard shell and, replace it with the new one fitted with the built-in lens. With smartphone camera quality we see today investing a little bit of money into accessories like this one or a smartphone gimbal might be a good idea.

Taking pictures can be a bit cumbersome though. The problem with a zoom lens is that it captures less light and the picture on the LCD preview is not quite as bright as with a standard lens. That’s probably OK for taking a photo because the camera will increase the exposure time automatically. The problem is focussing the lens for some shots if the LCD preview is a bit too dark to see clearly. If that’s the case then the lens will have to be removed and focussed manually, and then mounted back onto the phone before you can take a picture. Overall this might be a little bit too much effort and a lot of people should probably just buy a good 360 camera.

For some pictures though, you might be able to focus the lens by looking directly at the picture on the LCD display. In any case, for the added flexibility in allowing you to take long-range shots, it can easily be worth the extra trouble. The case mod is apparently only available for the Nokia 6230 and 6680 mobile phones at this time, but I’m sure other models will follow.