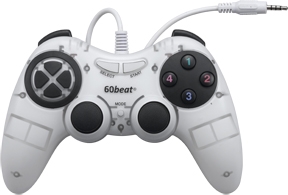 I think we all know what is missing from iPad games, a button-munching controller. Yeah, how else can iPad gaming compete with the Xbox and Playstation if it can’t reproduce the experience that gamers are so used to?
I don’t know if you are like me, but I can’t stand to do controls on the touchscreen. I recently downloaded some nineties-era X-men game and found that moving around was difficult. Those control touchpads in the corner take a lot of getting used to.
Fortunately, there is the 60beat GamePad, which connects to iPads and iPhones via headphone jack. Somehow, signals are sent to through the 4-foot cable and the iPad user can play any games that are compatible. This makes iPad gaming a lot like console gaming.
In all honesty, I am surprised that Apple hasn’t come out with some official gaming controller for the iPad. Maybe they will totally optimize the iPad 3 for games, and then have an official iPad joystick. I wonder if I am giving Apple any smart ideas for making more money.
Perhaps the 60beat should come up with a way to make a Wiimote for the iPad. Then again, that Wii U looks like a tablet, and we will probably never see the Wiimote again after its release.
Other features of the 60beat includes an ergonomic design, dual joysticks, D-Pad, and 10 action buttons including 2 for joysticks. You should be able to purchase the 60beat iPad Gaming Accessory for about $49.99 on this website.
Source