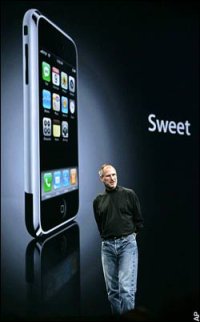 I guess everybody and their dog now knows that the 3G iPhone has been announced by Steve Jobs and company at the WWDC in San Francisco, but that’s no excuse for not covering such groundbreaking news. Let’s take a look at how the 3G iPhone is set to revolutionize the cell phone industry right after the jump, along with what the handset promises as well as the letdowns that one would’ve expected a year down the road.

Mark July 11 on your calendars, boys and girls, if you’re interested in picking this new 3G iPhone up. Of course, there are plenty of restrictions to be wary of, but I’ll touch that later. In the meantime, let us check out what this spanking new handset has to offer. Aside from the obvious 3G radio, you also get built-in GPS which will definitely come in handy when you’re traveling in a new territory with no idea on where to go and have absolutely horrid skills when it comes to deciphering road maps. Other than that, you also get iPhone 2.0 software which includes support for Microsoft Exchange ActiveSync and the ability to run hundreds of third party applications already built with the recently released iPhone SDK. All that sounds fine and dandy, but are the features really that appealing compared to other high end handsets from different manufacturers?

A major letdown of this handset would be the retention of the 2 megapixel camera. Come on Apple – it has been a year already and you can’t even cram in a more decent shooter? Nokia’s N95 has been around for quite some time already, and that already packs GPS navigation and a 5 megapixel camera. Even worse is the fact that this is a 3G handset, but it has no front facing camera for you to carry out video calls. Go figure.

Still, the $199 price point is extremely attractive, but it can only be purchased via Apple and AT&T stores and must be activated in those premises before you walk away grinning from ear to ear. There is a 2-year contract with each purchase though, so do take note of that.