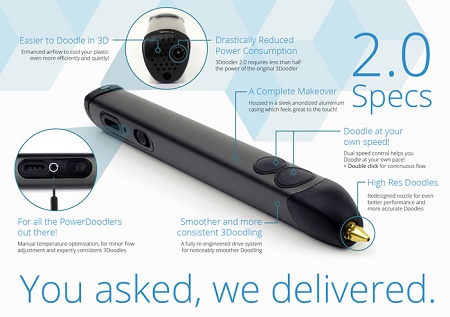 The idea of drawing in 3D seemed crazy when the 3Doodler arrived on the scene two years ago. By now we’ve seen plenty of other versions pop up, but you always have to wonder what’s going to crop up next. If you didn’t hop on the initial bandwagon, then it may be of interest to you that a new and improved version of the original is on the horizon.

The 3Doodler 2.0 extrudes heated plastic in the same way the first one did, with the plastic cooling instantly into a solid. This version is far lighter, slimmer, and is housed in an anodized aluminum casing that is not only more pleasant to hold, but is much stronger. The part that feeds the plastic through the pen has been vastly improved to make your drawings smoother, and you can control the speed at which the plastic comes out. There’s also a double-click feature that will allow continuous flow rather than having to hold down a button the whole time. The heating has also been stabilized, so you won’t have to worry about having to stop due to overheating.

You don’t need to worry about updates or installing any software, and it only needs your creativity to make something. Simply plug it in and draw anything your heart desires. If you don’t know how to begin, like staring at a blank page when you know you want to write, you can print off templates to understand how to build the structure and go from there. This will cost you around $100-130 for a more basic setup or more depending on what accessories you want.