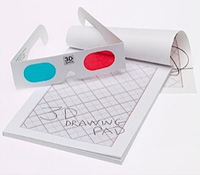 3D animation is so under utilized. For such a popular spectacle, you’d figure that companies would be jumping out of their seats to create 3D content. Is it a cost issue? Most likely. But man, when it’s done right 3D animation is so awesome. Not to mention you have an excuse to wear those awesome blue and red glasses.

As impossibly cool as it might sound, there is a gadget that actually allows us to create our own 3D artwork. The 3D Drawing Pad comes equipped with 50 specially gridded sheets of awesome 3D paper. They even provide you with a black pencil to make you doodles really pop off of the paper. It’s everything you need to create your own 3D drawings.

Usually, to create 3D animation, you need a set of blue and red pencils to outline your artwork. The 3D Drawing Pad’s special grid background makes the multi-writing utensil non-existent. One black pencil and a pair of 3D specs is enough to produce some 3D drawings to show-off to anyone bored enough to look.

But wait, there’s more! All of this for the low, low price of $2.95? What’s the catch?! Ok, enough with the infomercial shenanigans. But for real, the 3D Drawing Pad is pretty cool for the avid doodler, and a whole hell of a lot cheaper than producing professional quality 3D work. So why not give it a try for three bucks?