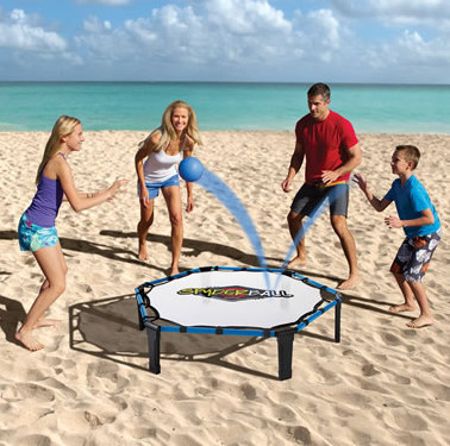 In this day and age, it does seem as though the family, while staying together under the same roof, does seem to have individual lives of their own that are separate. People hardly play board games with one another anymore, and the dinner table is more often than not a place where multiple conversations take place simultaneously, just not with one another, but rather, through a smartphone or mobile device. Perhaps it is time to bring about a change to such a situation with the $49.95 360 Slamball Set.

It might seem like a totally new game which is difficult to learn, but the 360 Slamball Set is actually the horizontal version of beach volleyball which will be able to challenge up to four players with 360° ball-bouncing action. It is ideal for sand, although it does open the door for exuberant play on grass or pavement. The game boasts of a six-sided trampoline which can be set up in seconds, where a couple of players will be able to enjoy a taut, 24″-diameter nylon rebounding surface on which to slam one of the two included 5″-diam. rubber balls at oblique angles in order to prevent a successful return volley. Four-person contests will see the second ball introduced into play, which would pave the way for two-at-a-time slams, feints, dives, and saves as well as double the scoring opportunities. The trampoline itself boasts of six heavy-duty plastic legs that hinge inward from their locked play position, ensuring easy portability and storage.