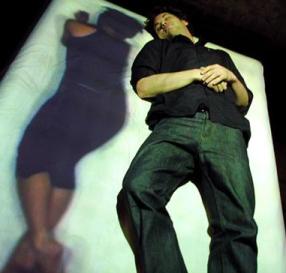 For some reason, I can’t help but think of some very bad science fiction movie when I see this photo. It would be a movie that takes place in a dark future where girlfriends are all but scarce, a world known as Geeklife.

This 2D Girlfriend project, created by Drew Burrows, is called INBED. Somehow I think the name is more of a description than an acronym. INBED works by having a projector on the ceiling beam an image of a lady down in that empty space on a double bed.

What makes the INBED impressive is that it has infrared sensors that can detect the position of the live person in bed, and adjust the virtual person accordingly. In other words, the virtual girlfriend will adjust her position to snuggle with you, spoon with you if you lay on your side, and even react to kisses by burying her face in a pillow.

It reminds me of a scene in The Sixth Day, where Arnold Schwarzenegger discovers his best friend has a virtual girlfriend. In that case, the girlfriend was a 3-D hologram, but I think the film was trying to show how lonely this character was.

The INBED also reminds me of a scene from Minority Report, where Tom Cruise is staring at holograms of his ex-wife and missing her. As I recall, the camera panned to reveal that the hologram wasn’t quite as 3-D as it looked, and the image was quite flat, kind of like the INBED.

In short, this INBED is a product for the lonely. I think we all can see the potential for this invention, but we really have to ask whether it’s worth it.