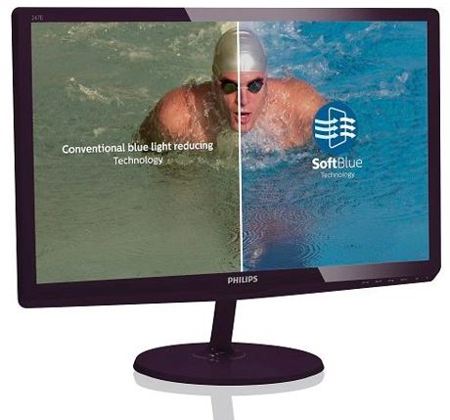 Many of us happen to work with computers these days at the office, and most of the time, this would mean having to sit behind the monitor for at least 8 hours per day. That might not sound like much, but when you take into consideration the long term effects of it, then you would surely start to wonder how much stress are your eyes being put through – which is why having the right monitor is also important. Having said that, for those who wish to give their eyes the very best, there is the 24” Philips Soft Blue display (model number 247E6BDAD) that will rely on Anti-blue light technology that protects users against the damaging effects of blue light from LED-backlit computer screens.

It has been said that continuous blue light exposure through extended screen time poses a potential risk of long-term damage to eyesight, so why not do yourself a favor by picking up the Philips SoftBlue monitor for $170 a pop.

Just what is blue light, exactly? It happens to be at the end of the visible portion of the color spectrum (380-450 nm), and is made of high-energy waves. These waves are not only strong but penetrating as well, and blue light will radiate from computer monitors, smart phones, and tablets. Consumers who spend hours a day in front of their screens working and socializing, will eventually suffer from the various side effects such as headaches, eyestrain and eye fatigue.

The Philips SoftBlue display will help reduce eye fatigue by eliminating 90 percent of blue light at harmful wavelengths, where this in turn mitigates the negative impact on eyes and improve well-being. It will be different from software-based approaches, as the SoftBlue display relies on a new technology that changes the peak of the blue-chip in the LED, and while at it, there will be no detraction from color fidelity or brightness so that one can continue to enjoy the accustomed image quality sans the prolonged detrimental effect of blue-light exposure. Isn’t it time you treated your eyes better?