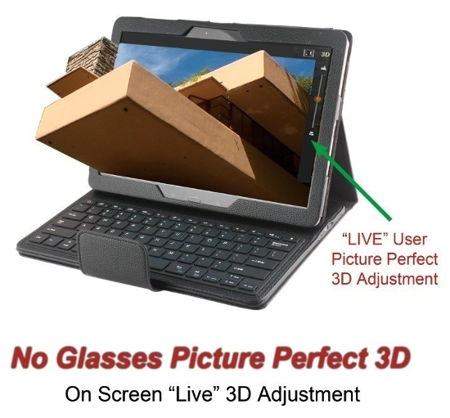 Time sure as heck flies. Was it less than 10 years ago that Full HD was the bomb – and we are talking about full screen TVs in your living room, mind you – and back then, it was a tussle between the likes of LCD and plasma screens, with LED TVs basically being unheard of. Now, we talk about Full HD displays – on smartphones, that is, and even then, this does not mean that the smartphones that come with those displays are of the high end variety. No sir, it would be Quad HD that takes center stage now. I suppose 3D TVs would be the next logical step in its “evolution”, so to speak, and here we are with Rebrandt 3D launching is latest range of 3D NO Glasses, 4K resolution, full HD 3D Auto Stereoscopic Displays (3DASD).

Of course, what better way to espouse the wonders of this new technology but through a visual demonstration? In order to achieve that, Emmy award-winning film maker Ken Love’s new Frank Lloyd Wright Film, “Falllingwater in 3D, the House Tour” premiered.

This film lasts slightly more than half an hour, and offers a historical perspective that details the creation of the Frank Lloyd Wright masterpiece, in addition to delivering a 3D cinematic virtual tour of Fallingwater, where it depicts the house, and for the very first time, captures the slew of all four seasons in 3D glory. When one catches that vision on the Rembrandt 3D 4K 58″ 3DASD screen, the impact was inspirational ot say the least.

Rembrandt 3D worked on its 4K auto stereoscopic television with a newly designed proprietary lenticular lens, where they made use of its proprietary IP alongside its Chinese-based 3DASD manufacturer. This 4K 3DTV has been specially designed to address the rigors of Digital Signage on site issues, ranging from changing traffic patterns to shifting viewer angles, image throw distance and environmental factors, and does offer a “no sweet spot,” no cones, no 3D artifacts visual experience with a 12-inch POP-off-the-screen 3D crystal-clear effect. One can choose from 23″, 28″, 46″, 58″ and 65″ sizes, depending on your budget and needs. Surely this is a departure from the regular 3D TVs that have been released?