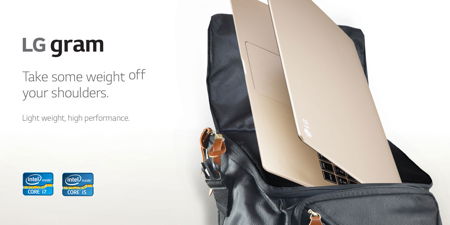 Owning a laptop is something that most of us already have — but to have a laptop that is able to get the job done while looking sleek at it, now that’s a totally different story. LG might be famous for their collection of consumer electronics, but how many of us actually know that they too, manufacture notebooks? The 2017 LG Gram notebooks are here to wow you, offering a trio of screen sizes to choose from, in addition to touchscreen capability, and a superior battery life.

Perfect for all users, ranging from professional-level content creators and business professionals all the way to multitasking students and casual web surfers, the 13.3-inch 13Z970 models and 14.0-inch 14Z970 models will tip the scales at an amazing 2.07 and 2.14 pounds, respectively. Those who prefer more viewing real estate can settle for the 15.6-inch 15Z970 models that will weigh a mere 2.40 pounds, never mind having a far larger screen size.

There will be two variants of the 13.3-inch LG gram 13Z970 — they will arrive in touch and non-touch screen models alongside fingerprint ID support. Powered by an Intel Core i5 processor with 8GB of RAM and 256GB of internal memory, they will retail for $999.99 and $1,099.99, respectively. Expect anywhere from 15 hours to 17.5 hours of battery life.