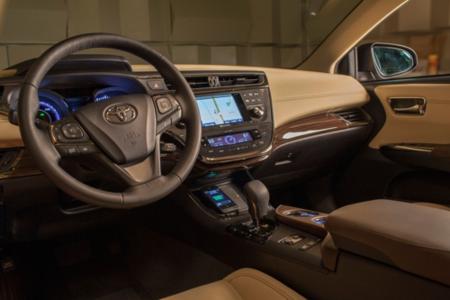 If you are in the market for a new car at this point in time, perhaps it might be time you checked out the 2013 Toyota Avalon Limited that boasts a first in the world – it will hold the honor of being the first vehicle available in the world which comes with in-console Qi wireless charging for Qi–enabled mobile phones and devices, considering that this is part of a Technology Package, and it does not matter whether you decide to settle for the gasoline or hybrid versions, the new 2013 Toyota Avalon Limited will still rock with wireless charging capability regardless.
Apart from that, you can find other goodies such as the Dynamic Radar Cruise Control, Automatic High beams and a Pre-Collision System. Just to refresh your memory on what all the deal about Qi is, it is actually the global standard for wireless power and charging. With the implementation of Qi, devices can be juiced up without the need for a separate charger that has pesky wires, all you need to do is place them on, or near, any Qi-enabled surface, and you’re good to go. It does not matter the make or manufacturer, as any Qi-enabled device will work with just about any Qi charger. Talk about unprecedented flexibility!
The 2013 Toyota Avalon Limited’s wireless charging pad will be integrated into the bin lid that is located in vehicle’s center console. The system can be turned on using a switch beneath the lid, and charging your power hungry device is as easy as placing the handset upon the lid’s high-friction surface. Rest assured, unless you are going to do some serious drifting with the Toyota Avalon Limited, your smartphone will most probably remain there without giving two hoots about how hard you’re pushing the car.
The new dramatically-styled 2013 Avalon from Toyota is set to arrive in showrooms from the beginning of this month onwards, and it will also be the first to come with Toyota’s Hybrid Synergy Drive that delivers a combined EPA-rating of 40 mpg. Any takers?
Press Release